Such an extraordinary place and time to be travelling. COP 21 only days away and here we were in Bretagne – taking a deep breath before entering the fray back in Paris. A good time to prepare.

On the morning we checked out we decided to walk to find the bus. It started raining. We walked along the foot paths in single file pulling our bags with our new umbrellas pulled down low keeping our upper bodies dry, just allowing the view ahead. We walked far further that we needed to it turned out having overshot where we wanted to be and then following some confusing directions which took us somewhere else altogether. But we caught the bus with a little time still to spare so felt pretty satisfied with that. It was our first real experience of rain and it rained all day, at times quite heavily, and with gusts of wind that blew our umbrellas inside out. Margi’s wayward umbrella was punished, banished to a rubbish bin to spend a sorry minute contemplating the error of its ways. It was retrieved by a friend and put back into service with strict instructions to behave.

We caught two busses that day – the first to Angers and then on to Rennes. In Angers we arrived at the station and nearly didn’t get off the bus in time. We went looking for lunch in heavily pouring rain and arrived in the Restaurant de la Gare like drowned rats. The staff looked after us with such great sympathy and fuss and we left feeling nourished and warm and ready for the next leg. Again we find the French people so friendly and sympathetic.

We stayed for two nights at the Auberge de Jeunesses in the old quarter overlooking the Canal St Martin. After a morning on our laptops working away at our planning and our contributions to the PlaceToB activities etcetera we headed out to visit the EcoMuseum on the outskirts of Rennes.

It took us a considerable bit of traipsing across town on buses and trains and buses to get there. Five centuries of farming practice – the original farm house, the lifestyle, the barn full of animals, cows eating hay from the manger, pigs in the sty, horses, miniature goats in the paddocks – all heritage stock. The orchards still bearing apples that were too delicious for words – such flavour. All protecting the DNA and the biodiversity from the obliteration of industrial farming and monocultures.

That night we headed out to a different part of town out past the airport to the Parc L’Exhibition and an annual UNESCO sponsored cultural event helping to keep alive the old music of Bretagne that has been deemed a national ‘treasure’. Arriving by bus with a bunch of other people of all ages we made a bee-line into the hall and to the food – Creole Vegetarian with Rice and local beer. Sensational!

Stayed put for a while and became accustomed to the dance and music and then made our way to the other dance hall only to be blown away by what we were confronted with there. A stand of seats on scaffolding holding perhaps a thousand people and perhaps another thousand people who were dancing in long lines in enormous circles, all threading through the whole dance floor. They were all doing a simple step for all ages and proficiencies and more to the point, were making eye contact with each other as they were passing in threads going the other way. The step made the whole dance floor bump up simultaneously; an exemplary form of cooperation.

Sitting up there in the audience rows looking out over the amazing scene was one thing. Being in amongst it was something else completely.

We caught the shuttle bus back to the city and found ourselves late on a Saturday night in the little centre of Saint Anne – so pretty, an antique town centre tucked into the city and still full of contemporary life. A hot chocolate French style – ooh la la – and then we found the bus stop. The night was not over yet though. We still were to meet Cheko – the exuberant man from Senegal with whom we found we had much in common fighting for things we believe in, working through NGOs and being in France at this amazing time. A lovely exchange at the bus stop and then we found our ways home and had an excellent night’s sleep.

One more day in Rennes and we decide to walk from Auberge de Jeunesses to Saint Anne and found it wasn’t far at all. We found a café that served only coffee and spoke with a young couple with a puppy called Jack Sparrow. We talked about the terrorism and the demoralising effect of the banning of the march and of the creative other ways that would emerge to take its place (March4Me) (The Human Chain) (The Shoes in Place de la Republique). And we talked about the link between the terrorism of the Daesh in Paris and climate change impacts that occurred in Syria four years ago that contributed to the playing out of the whole Syrian situation and what that implies for the future. 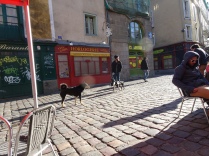 A bit further into this sunny Sunday in Rennes we stumbled upon Le Khalifa – a fabulous restaurant that served us tagine and couscous with such flair and in such sumptuous surroundings, so colourful, with aroma and steam and leadlight windows and such flavour. We were in heaven. 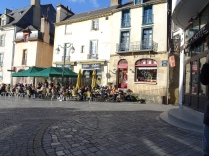 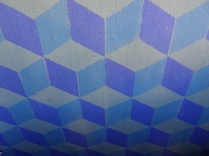 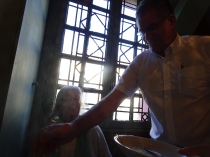 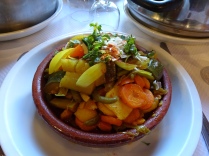 The next day we headed to Mont St Michel and what a surprise that was. 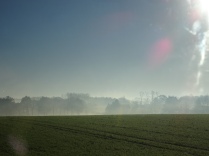 Firstly we didn’t realise we booked into a hotel actually in Mont St Michel. The room looked down into the narrow little street – the main street nevertheless – that was full of traders and surely not that different from the historical original purpose of this street. It led to the Abbey and a view out over the tidal flatlands where les moutons (sheep) graze and are known for their different tasting meat as a result; more salty of course. 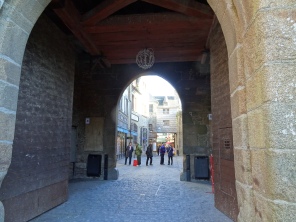 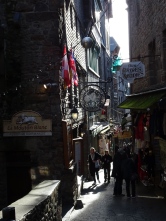 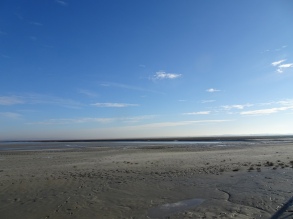 The whole place was comparatively empty more due to the terrorism than the off-season we were told. At the ramparts before the gates to the town, Margi and I were stopped by a journalist. She was researching how the recent terrorism affected people’s attendance at iconic tourist locations. Margi spoke for us both when she said as Australian’s we are not easily intimidated and in our case we are also stepping out in solidarity for the people of Paris and people everywhere who are victims of terrorism. We spoke further with her later and explained our view that climate change and the fight for resources globally are entwined and destined to become worse and more frequent if the climate emergency is not recognised and the appropriate climate emergency response including ensuring climate justice is initiated. 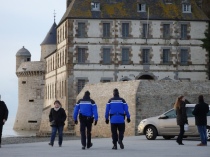 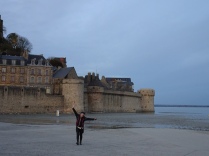 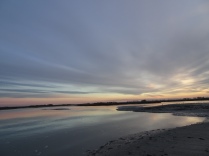 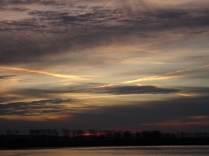 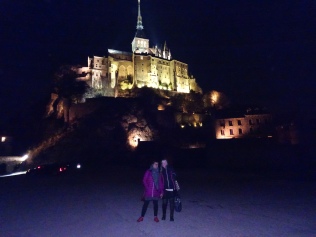 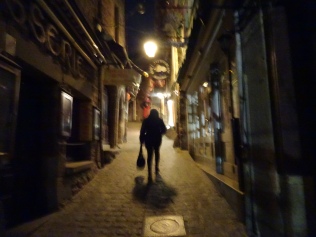 Although such a picturesque place it also was for the tourists and our quest is community and collaborative economy, climate change and communication, cooperation, compassion and other ‘c’ words like Cancale – the name of the next little coastal town that beckoned. I’ll let the photos do the talking. 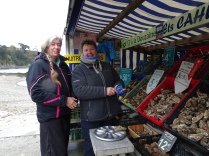 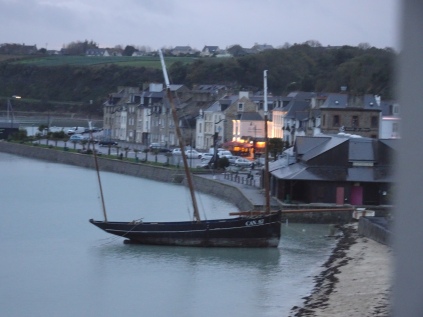 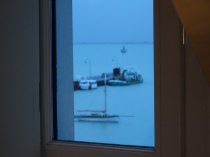 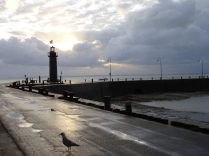 Most of those first two weeks or so were delightfully mild, unseasonably warm, and we marvelled at the soft air, the flowers, blue skies and sparkling sunshine. That quite suddenly changed as, what we were told was, an unseasonably icy cold snap arrived. This snap was linked to the strange ‘COLD BLOB’ over the north Atlantic.

…..  just so we have some idea of what what’s going on with the weather in the context of the climate changes we keep talking about … while “global average temperatures have reached new records”  – brace yourself Australia – the “cold blob” is having an effect in the north Atlantic too. Basically the message is “expect the abnormal”.

Here is an extract re the “cold blob” that can be found in David Spratt’s post on Climate Code Red: How 2015’s record-breaking El Niño emerged on a warming planet.

“There are other extremely odd features in the climate system this year that can throw a curve ball into the complex work behind predicting El Niño-driven global weather patterns. One such example is the “the cold blob” in the north Atlantic that appears to be caused by ice water running off the melting Greenland ice sheet and is affecting ocean currents. “Our scientific understanding of El Niño has increased greatly in recent years. However, this event is playing out in uncharted territory. Our planet has altered dramatically because of climate change […] So this naturally occurring El Niño event and human induced climate change may interact and modify each other in ways which we have never before experienced. Even before the onset of El Niño, global average surface temperatures had reached new records. El Niño is turning up the heat even further.”
–World Meteorological Organization (WMO) Secretary-General Michel Jarraud.

And here is an excerpt from The Guardian (UK) article: Forget El Niño, start worrying about the North Atlantic blob  …. “The easterly winds of last week, bringing unseasonably cold weather, are believed to be as a direct result of this North Atlantic cold diverting the jet stream and allowing cold easterly air from Siberia to reach our shores. There has already been snow in Germany. How the competing forces of El Niño and the cold blob in the Atlantic combine to shape our weather we will probably not know until after it happens, but meteorologists “expect the abnormal” for at least 18 months.”