(NB. As I wrote this post the night of terrorism – Friday Nov 13 – is still ahead of us and we, like the rest of Paris and the world, are unaware.)

It is Armistice Day: the celebration of the World War 2 agreement to stop fighting. 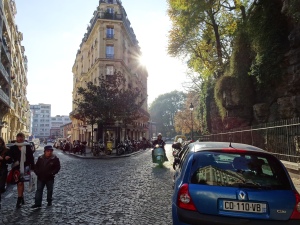 In Paris the significance of this day is embedded in the very cobblestones, the streets, the buildings. ‘If these walls could only speak’. The history. The Occupation and the Liberation of Paris. The gallant and determined French Underground. The suffering and the devastation – not even a hundred years ago.

Every generation has its huge and scary challenge they say. Devastation on an unimaginable scale. Overwhelming odds. To capitulate or keep going? Who will step up? Who will lead the liberation? Who will survive? This day and these thoughts are a poignant backdrop to the experience I am about to have. 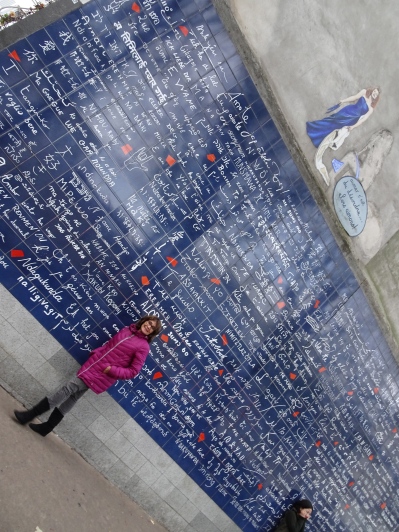 The Wall of Love

Margi and I have been staying at ‘Friends’ the funky backpackers in Barbès an edgy, multicultural, poorer part of Paris. A short walk away is Montmartre. The hill of martyrs. 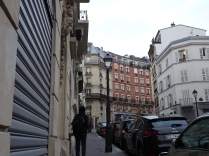 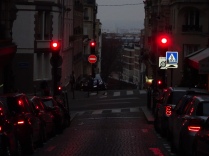 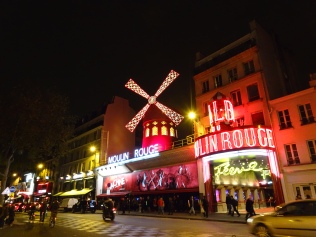 This is where Vincent Van Gogh lived for a while. Where the Moulin Rouge is still operating and where we stumbled across another much more authentic ‘moulin’ up the hill. It is where you can find jazz late at night, restaurants and curved streets and steep ones and steps that bring you to the top of the hill and the huge Sacred heart cathedral. The Basilique de Sacré Couer.

From the dawn of time Montmartre has been a place of worship : from the Druids of ancient Gaul, through the Romans with their temples dedicated to Mars and Mercury, to the Church of Saint Peter, the oldest in Paris, rebuilt in the 12th century next to the Royal Abbey of Montmartre by Louis VI and his wife Adélaïde de Savoie… Finally, the Basilica of the Sacré-Cœur, erected at the end of the 19th century. #1

We are booked in to stay the night here – inside Sacre Coeur – and in exchange for accommodation (€4 if you have your own sleeping bag) have agreed to take part in the ‘night adoration’ which is part of the perpetual prayer that has been prayed here by a continuous line of people with their individual prayers, reflections and meditations for more than 125 years.

I wake up in my ‘box’; the tiny one-bed cell with the curtained doorway and open to the ceiling of the large room I am in. Another 9 boxes are in here – several are occupied.

I feel full of positivity for this moment, of anticipation and a sense of the significance. I am here because I’m in Paris on a mission. I’m wanting to help get a message out – a strong and convincing ‘can do’ message. Climate change requires an emergency response and a huge mobilisation to address it and change direction. I feel the biggest obstacle is the sense of overwhelm that so many feel. I feel it myself, often, who doesn’t? It just cannot be allowed to paralyse us at this time of great need for strong action.

There’s another message now feeding into that overwhelm – the message of ‘too late’ is starting to be asserted. These spokespeople, commentators, ‘leaders’ and the disingenuous have gone from ‘there is no problem’ to ‘it’s too big for us to solve’ to ‘now it’s too late’.

Where has the discussion been held looking at options to restore safe climate conditions? An option I am convinced is real and I am committed to pursuing. What else on earth matters? Everything else is moot.

The only circumstances in which other issues – big and small – matter is if climate disruption, climate catastrophe, the destruction of the biosphere that supports life as we know it is averted; in other words if we succeed. If safe climate conditions can be and are restored then we have a lot of other problems that will need to be dealt with. If we can couple some of these issues together on the way through as we fix the primary problem – for example the climate system and the human economic system – we can come out the other side with flourishing communities.

I am here in Paris and yesterday was Armistice Day. The parallels leap out at me. The overwhelming force of Germany that forced the surrender and humiliation of France and the years that followed with Paris and most of the country under occupation with no-one knowing when it would end. The boon given to the Nazis that perhaps accentuated the blows felt elsewhere in Europe. The French enduring the defeat, maintaining their resistance through a gallant and high risk underground movement and waiting and hoping to be liberated.

My father sailed off to fight the Nazis in the Middle East and was diverted in the Indian Ocean and taken to Singapore when the Japanese were invading the Malay Peninsular. In the little he told me about that terrible time he made it clear that he and the other Australian soldiers were angry and dismayed by the British decision to capitulate after barely a fight. In Australia our government made a secret decision to sacrifice the land and people above “the Brisbane Line” beyond which they believed the country was indefensible.

Watch what is happening right now. Who is being sacrificed in this climate change scenario.

When are these decisions to give in on behalf of everyone and to adapt to the consequences – often unknown – ever justifiable? In the case of climate change, any such decision is condemning the world and future generations to a desecrated biosphere with impacts most people do not understand. I believe that of those who think they do understand there are many who really don’t. It is worse than we want to think. Unimaginable and unconscionable.

I speak to people everywhere. I hear the cynicism and scepticism, the indifference and the wilful ignorance. From some I hear the hope. Is the hope strong and active and based on conviction that we have capability if not certainty? Or is it a faint hope, forlorn, defeated in all but hope, with a saviour in there somewhere.

Either way I feel the energy in some quarters growing that we must try. People are collecting their strength and sense of shared threat and shared purpose. They are gathering, and getting strategic and taking action in well-thought out ways. There is a spirit growing.

I’m leaving my box now and heading up into the magnificent basilica. We walked into the Basilica last night and walked quietly around the centre – the nave – past thirteen little chapels off to the side. The very first chapel brought tears to our eyes and clutched at our hearts. It was an installation of boards on easels with pictures, prayers and explanations about the COP21 meeting here in Paris in just a couple of weeks. And that’s the very reason why I’m here.

So I will go to that chapel and meditate on those words with my heart full of hope and tears in my eyes.

Entering that sacred space I am aware that people had filled those pews for over a century bringing with them their prayers, entreaties, love, fear, and all their human experiences. Built before the first world war and the second world war I can barely imagine the pain and horror of the experiences that were brought to this alter. Although not a Catholic and in fact not a believer of the god of any religion, I found it easy to be there and practice my mantra “I am that, that thou art” til I felt present enough and able enough to go to the spaces I want to explore.

I imagine the cosmos and my tiny place in it. I feel connected to time and space and the place I am in and the part of me that exists within it all. I feel reassured that this church has allocated space in one of its chapels to talk about climate change and to encourage right action. I imagine a time coming when every church will allocate space to the need to protect the essential bio spherical connection with our earth. Great institutions, everywhere that humans inhabit, business, schools, offices, homes, individuals, hearts, minds will have that space in their consciousness or floor plan and the ramifications will be seen in their use of renewable energy, the new approach to conserving, not consuming, and everything else that goes with that.

I focus on my own need to not just lighten my ecological footprint but to also lighten my psychic and emotional footprint and to learn how to work tirelessly without getting so tired. I move my state of being to the one of love and grieving and once again abandon fear as self-defeating.

I read again the two prayers of Pope Francis and am yet again blown away by these words and cry tears of love. He prays to God to “touch the hearts of those who look only for gain at the expense of the poor and the earth”. #2 “Enlighten those who possess power and money that they may avoid the sin of indifference, that they may love the common good, advance the weak and care for this world in which we live. The poor and the earth are crying out.” #3

“Teach us to discover the worth of each thing to be filled with awe and contemplation, to recognise that we are profoundly united with every creature as we journey towards your infinite light.” #2

“give us the grace to feel profoundly joined to everything that is.” #3

As Uncle Bob, cherished elder and teacher of Kanyini says, “Kanyini – the principle of being; Kanyini – every living thing is family; Kanyini – we’re all responsible for each other. The teaching is passed on through story, song, dance and art. Kanyini – unconditional love with responsibility.

Then we left Sacre Coeur and went out into Paris and the dawn of the next day. 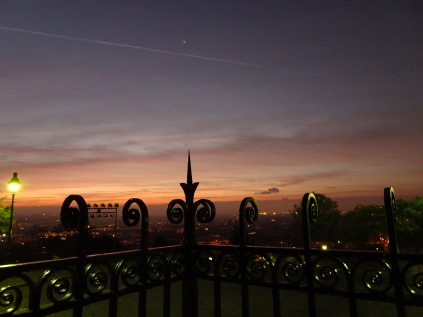 #2 A prayer for our earth

#3 A Christian prayer in union with creation