A group of committed people are trying desperately to hang on to some land that is being sold off by the University. It is green-space – once a botanical garden and research facility. Six big glass houses, some old, run-down buildings, some exotic trees and lots of overgrown woodland … They are wanting the land to be kept in the community and they are hoping that a portion of it can be used for some co-housing. Took some photos and enjoyed the courage and determination of these people and the inspiration of their ideals. 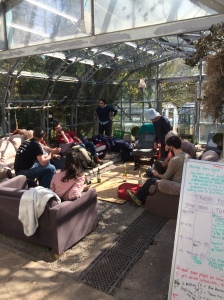 Couldn’t stay long tho – had committed to run an informal presentation (with Murundaka photos) in the common house meeting room. Lots of people came to that and the conversations went in all directions.

That night also happened to be the Folk Club’s meeting night – lots of musicians – two accordion players, a violin, a cello, some congo drums, a recorder, a eukele and two guitars plus lots of people singing or leading group sing-alongs with printed song-sheets and some great classical old English folk songs – some with very powerful lyrics – and also some songs in Spanish, Somalian and one in Icelandic.

The next day was our last in Lilac. Paul called round early and we talked for a while about Safe Climate Restoration. He had a lot to offer including a potential link to George Monbiot. Perhaps some things will come out of it.

Left LILAC with lots of learnings as well as special connections.

Environmental conservation, community and cooperatives have been enduring threads in my life. Promoting sustainable lifestyles and more lately, focussing on restoring a Safe Climate, is work expressed predominantly through organisations such as The Sustainable Living Foundation (which I co-founded in 1999 - current President) and the others listed as links below. I am some way into a professional doctorate with MIECAT on "Mobilising Whole Communities to Restore a Sustainable Environment" and have in recent years moved into MURUNDAKA – a (more) sustainable, (more) affordable co-housing community / housing cooperative in Heidelberg, Melbourne (for which I gave up my co-op house of 19 years including veggie garden and small orchard) and it's great. I'm also a mum of two grown up daughters and have five step children.
View all posts by Giselle Wilkinson - 4allsentientbeings →
This entry was posted in United Kingdom. Bookmark the permalink.

2 Responses to The “Leeds Community Project”